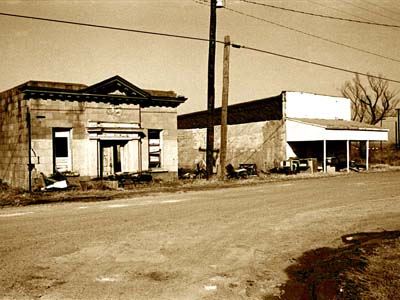 Britton was originally called Helland beginning in November 1895 and was named for Joseph Helland, a general passenger agent on the Texas and New Orleans Railroad. Later the name changed to Hellandville and then on November 13, 1896, it became Britton, honoring H.C. Britton, a conductor on the railroad during this period.

Britton was situated on the Texas and New Orleans Railroad. State Highway 34 went through Britton until the new Highway 287 was constructed about four miles west of town in the 1940s. The trains brought the mail and two passenger trains stopped there morning and night.

Britton thrived at one time, with two gins, two churches, a school, three doctors, three or four stores, a post office, a depot, a bank, a restaurant, a drug store, a blacksmith, a barber, an ice house, a grain elevator, an egg-processing center and later a garage. At one time there was even a movie house. The population was reported as 300 in 1925 and 200 in 1932.

F.S. Windle built the first and only elevator, encouraging farmers to grow small grains. George Magee donated land for a cemetery as well as the Methodist Church and school site. G.W. Maynard donated land for the Baptist Church site. The Catholic Church began in 1941.

Since Britton is split between Ellis and Tarrant Counties, when the school closed the town consolidated with Midlothian and Mansfield school districts.