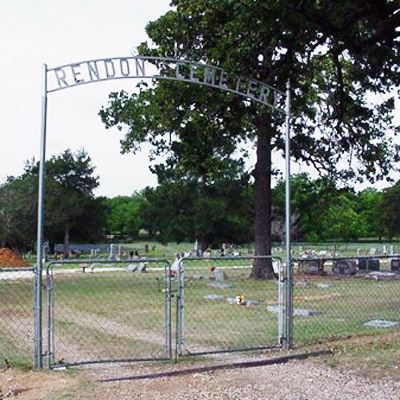 The Crossroads Community was the early name for the Rendon area. The Rendon name was derived from Joaquin Rendon a Spanish-Mexican resident. He had the first land grant to the area. It was said to be a Spanish land grant. The survey is named Joaquin Rendon and is located in southeast Tarrant County. The center of the community soon formed around the property given to the citizens of the Crossroads and Rendon neighborhoods by WL. Norwood on October 23, 1897. The property donated was given for a cemetery, a school and a church.

Retta is said to be named for the wife of a supervisor of the I.G.&N. Railroad. We describe Rendon and Retta together because most of the residents have always considered the area as one community.

The settlers of the Rendon-Retta area believed in the education of their children. Schools were set up very early and children were required to attend. The area had two schools at the turn of the century. The earliest one was called Eldorado. In 1907, Eldorado consolidated with the Rendon School, which was being held in the church at Rendon. It remained here for two years and in about 1911, a two-room school was built where the Rendon school gym now stands. This was property sold by WA. Norwood and his wife, Julia, for school purposes. Time passed and the population increased. The school was later enlarged.

The churches around Rendon and Retta have been numerous and varied. There have been Baptist, Methodist, Church of Christ, and Assembly of God. Every summer the community would have a singing school and it would last for twenty days.

The business activities of Rendon centered around Wash Norwood's store which began somewhere around 1895. In this store there was a post office and a doctor. Mr. Norwood boarded the doctor, Dr. McNairn in 1899. Rendon for a time had a cotton gin and the Maxwell Syrup Mill. In 1905 to 1907, the township of Retta's business district was platted, sold and a town began. It occupied an acre of land. The railroad right-of-way was signed in 1902.

After WWII, Rendon business increased. Earl Jones constructed a garage to repair cars. Lendon and Gwen Sheffield opened a cafe named "Lindys". Next to the cafe was a feed store and skating rink. Marvin Berry opened a TV repair shop.

There have been various grocery stores in Retta. Probably the oldest one was a two-story deeded to Frank Thornton in 1907. His brother-in-law, Tom Widener was half owner. In the second floor of this building, the Woodmen of the World held their organization's meetings.

On July 1, 1954, neighbors met to organize a volunteer fire department. While the men fought fires and answered calls, the women formed an auxiliary and did all they could. They carried water, drove trucks and held fund drives of all kinds.

One of the reasons that Retta was larger and more prosperous at this time than Rendon was because of the cotton gin in the area. There were three cotton gins in Retta at one time and the flag station in Retta was where all the cotton was picked up.

The activities of the area have always been community, school and church related. Rendon-Retta is a thriving and growing community, just west of Mansfield on F.M. 1187.