While its earliest origins are unclear, early maps indicate a wagon trail route ran through this land in the 1800s. The property was purchased in the 1960s by Elmer W. Oliver, who worked for the city’s water department. He used it as a cattle ranch and retreat for family getaways. After both Mr. and Mrs. Oliver’s death, the property was owned by their daughter, Marianne Williams.

In 1994 the Mansfield Park Facilities Development Corporation accepted a 13-acre land donation for use as a linear park from a residential developer building on the south side of Walnut Creek and adjacent to property owned by the Williams Family. In 1999, the City acquired seven acres of the Williams property to widen Matlock Road as well as create a detention pond and linear park trail connection.

Although Mansfield was growing around their property, the family wished for the land their father held so dear to remain untouched. They approached the City of Mansfield about purchasing the property for a park where the beauty of the natural space would be maintained and education, appreciation and preservation would be the principal goals driving its development. The sale was finalized in 2004. The property in this sale, as well as the 20 acres previously acquired by the City, comprises the 80-acre Elmer W. Oliver Nature Park.

In 2010, the Mansfield Park Facilities Development Corporation and City Council hired a design firm to master plan the 80-acre property, dividing the project into three phases. Phase I, consisting of all outdoor elements, is completed. Future plans include an indoor Nature Center and Learning Lab. As Mansfield’s only nature park, Oliver Nature Park offers unique classes and activities in which students and adults may participate. Additionally, this park is home to a variety of ecoregions, diverse plant and animal life, wildflowers and more.

Oliver Nature Park officially opened on January 25, 2014 and has been a community favorite ever since.

In 2020, the city completed Phase 2B of the Walnut Creek Linear Trail, which added a 1.35-mile paved trail from the rear loop of Elmer W. Oliver Nature Park to the 360-Tollway, crossing Philip Thompson Soccer Complex midway through.

The nature park was named for Elmer W. Oliver at the request of the family, to honor the man who first walked among the trees nestled by the creek bank and realized that this is where his "roamings end."

Elmer W. Oliver was born Sept. 13, 1898, in Louisiana. After the World War I veteran came to work in North Texas, he fell in love with a Mansfield girl, and they chose a 200-acre plot along Walnut Creek to raise their growing family. Over the years the family sold off portions of the property, leaving about 60 acres on the north side of Walnut Creek for their retirement homestead.

The fields of wildflowers and prairie grass shaded by large pecan trees became a wonderful gathering place for the family during holidays and special celebrations. Mr. Oliver loved the property and tended to it himself, mowing the acreage on his tractor and trimming each tree by hand. The beautiful property he loved became what Elmer Oliver envisioned when he first saw the land in the early 1960s - "This is where roamings end." 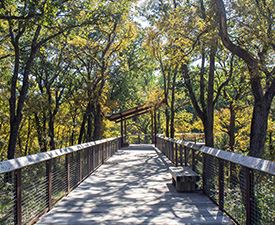