History of the Mansfield Fire Department

However, the Mansfield Fire Department was once much different. Dating back to 1901 as a Volunteer Fire Department with 15 staff volunteers, they were led by Mansfield’s first Fire Chief, J. Grow. Mansfield was much smaller then, and water to fight fires came from a small, 2-inch water main with just five openings along Main Street. The firefighters did the best they could with very limited equipment of just 250 feet of hose wrapped around two pieces of pipe.

It didn’t take long to figure out the Fire Department needed more. A serious fire in the business district helped convince city leaders that additional support was necessary. Between the city and Chief Grow himself, $150 was raised to ultimately purchase a hose cart and an additional 250 feet of hose. The cart was so heavy that the city offered $1 to anyone who had a team of horses and was willing to help pull it.

Another big year for the Mansfield Fire Department. The department decided it was time for its first permanent building. The city provided funds, but not the labor. Fire Department personnel built it themselves in ONE day! The 14 X 20 foot building was built on the back lot of the chief’s lumber yard and it was painted bright red.

By this time motorized vehicles of all types were starting to appear. It was the first time the Mansfield Fire Department became motorized. Its single truck carried just one piece of equipment, and it was a major step into the automotive age.

By this time, the Fire Hall building had grown to 20 X 20 feet and was wholly owned by the city. However, another serious fire resulted in big changes for the Fire Department. A fire that started at the Farmer’s Lumber Company nearly destroyed the west side of Mansfield. The magnitude of the fire prompted a major reorganization of the department in October of that year. Welding shop owner, Raymond Miller, better known as “Bulldog”, became the new chief. There were now three trucks in the department. They were older trucks that carried water tanks, and could pump up to 500 gallons of water per minute.  A year later, a 4th truck joined the department, (Mansfield’s first factory-built fire truck) which was a used model bought from Navy surplus. 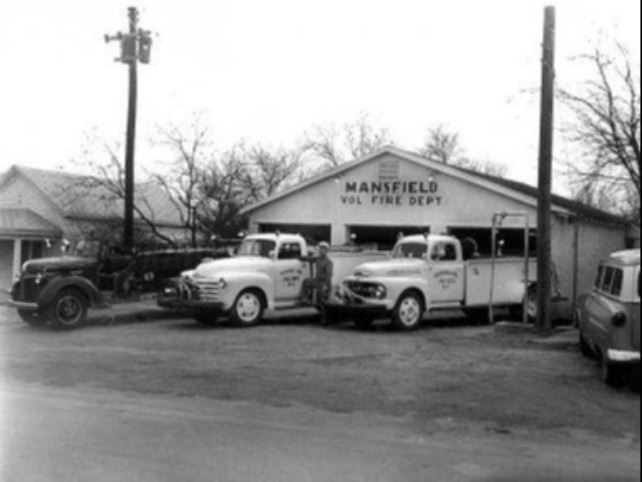 Mansfield’s Fire Department was still made up of volunteers in the ‘50s. Budget struggles continued to be a challenge, and firefighters often knocked on doors around town seeking donations. Enough money was raised to build a new three-stall fire station on East Broad Street. Two-way radios were purchased, uniforms were provided, a dispatcher was hired, and fire phones were installed in 13 of the firefighter’s homes. The Mansfield Firemen’s Ladies Auxiliary was organized with 9 members. The support of the Auxiliary was important for the success of the department.

Growth continued, and the city secured a site for a new fire station at 210 Smith Street at a cost of $15,000. However, budgets were still tight and the city was unable to finance the construction of the new building, so the volunteers poured the concrete foundation and built a metal building. Hard work and long hours started in April, and less than three months later the building was occupied.

This was the darkest year for the Mansfield Fire Department. An explosion occurred on July 31 while fighting a fire at the Red Ball gas station in nearby Kennedale. A 10,000 gallon gasoline storage tank exploded. Two firefighters died, including Fire Chief Harry Blissard and firefighter Shirley “Clyde” Copeland, who died of his injuries three days later. More than half of the other Mansfield firefighters on scene were severely burned in the explosion. Much of the department’s equipment was also lost. Assistant Chief H.E. Baxter, Jr. took over as Fire Chief.

The years from 1970 to 1980 were considered the boom time. Mansfield's population in 1970 was 3,658 and grew to 8,102 in 1980. Shortly after the election of the fire department officers in 1975, it became clear that an all volunteer department could not provide adequate fire and ambulance service to the growing population. The City moved forward with plans to begin hiring paid firefighter positions.

The first paid firefighter was hired in October of 1977. This employee worked from 8 a.m. to 5 p.m., five days a week. At best, this only provided personnel to check the equipment and make sure everything was ready for an emergency. Response during the day was slow because of the limited personnel in town and most were employed in Fort Worth.

The second paid firefighter was hired in January of 1978, which provided two people at the station during the day from 8 a.m to 5 p.m. This improved responses greatly during the day until the volunteers could return from work. The first paid Fire Chief was hired in August of 1978. Then on October 1, 1979 with the employment of additional personnel, shift work started. Two firefighters per shift worked 24 hours on duty and 48 hours off duty provided protection to the City.

The Mansfield Fire Department transitioned from a volunteer organization to today’s professional, all-paid department. The transition began before the turn of the century, and was not fully achieved until the 21st century. Four fire stations are currently in use, with a 5th in the planning stage for an opening in early 2021.

The Fire Administration offices are located on the second floor of the Public Safety Building, 1305 East Broad Street.