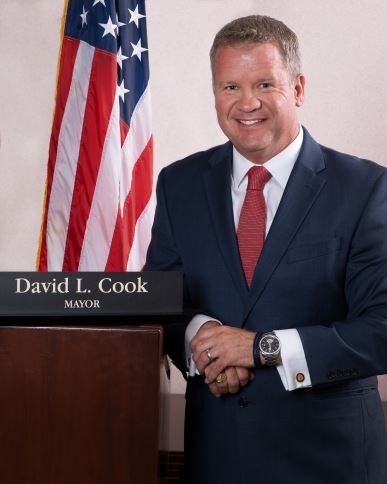 David Cook is a long-time Mansfield resident who was first elected Mayor in 2008 and is currently serving his fifth term.

The 49-year-old attorney is a graduate of Mansfield High School, Stephen F. Austin State University and Texas Wesleyan University School of Law. Cook is a former Legislative Aide to the late State Senator Chris Harris. He was a Law Clerk and an Associate Attorney at Harris' law firm prior to partnering with Harris in January 2004 to form Harris Cook L.L.P., where David is now Managing Partner of the firm.  David is Board Certified in Family Law by the Texas Board of Legal Specialization.  Mayor Cook has been recognized as the "Best Local Government Official" by the Mansfield News-Mirror, as one of the "40 Under 40" by the Fort Worth Business Press and named a Top Attorney by Fort Worth Magazine.

Mayor Cook serves on the Arlington Mansfield Area Salvation Army Advisory Council and YET Board, Tarrant County Mayor's Council, North Texas Commission, and is past Chairman of the Southeast Tarrant Transportation Partnership (SETT) and former Board Member of the NCTCOG Regional Transportation Council.

Mayor Cook has been a long-time community volunteer in Mansfield, working with non-profits such as Mansfield Cares, Mansfield Mission Center, and Mansfield Feed the Kids Summer Program, all of which provide assistance to families in need.  He also has been instrumental in establishing Mansfield Churches FOR the City, Mansfield’s celebration of National Day of Prayer, and the Mansfield Veteran’s Day Parade and Salute, as well as working with Mansfield Area Chamber of Commerce, Mansfield Historical Society and Mansfield Independent School District (ISD) Strategic Planning Committee. He has previously volunteered with Mansfield Youth Basketball and the Mansfield Soccer Association. He and his wife Tonya have four adult children, one daughter-in-law, two sons-in-law, and one granddaughter.

In December 2019, Mayor Cook filed to run in Texas House District 96, which is comprised of the Cities of Mansfield, Kennedale, Crowley, and portions of Fort Worth, Arlington, and Burleson.  The General Election will be in November 2020.  Upon filing to run for State Representative, this triggered an automatic resignation of Cook’ position as Mayor, however, he will continue to serve as Mayor until such time as his successor is sworn in.