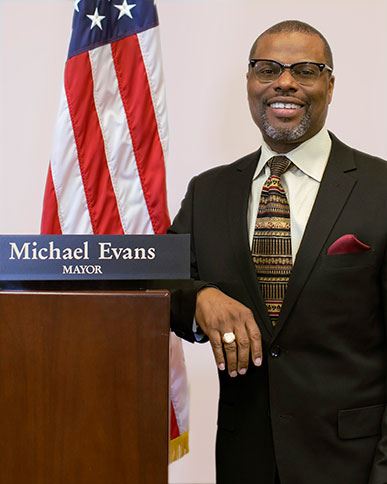 Reverend Dr. Michael A. Evans, Sr. was elected Mayor of the City of Mansfield, Texas, in December 2020. He is the proud pastor of the Bethlehem Baptist Church in Mansfield where he has served for more than 30 years.

Mayor Evans was elected to the Mansfield Independent School District Board of Trustees for three terms, serving from 2007 to 2016 including two years as board president. He also served as an administrator with the Tarrant County College District, with coordination and oversight responsibilities for the district’s ESL and Adult Basic Education Centers. He was a member of the TCC Board of Trustees from 2016 to 2020.

He serves as a consultant on race relations for church, county, and state officials and is a passionate Mansfield community advocate. As part of this advocacy, he is has founded several organizations that work for the betterment of individuals and the community:

Mayor Evans also served as a commissioned officer in the U.S. Navy from 1990-1998 as a reserve chaplain. He is director of the Life Touch Cottage Ministries Inc., a Christian education and evangelism organization serving children and youth in Nigeria–West Africa. He is the former director of African American Ministries for the Baptist General Convention of Texas, where he also served two consecutive terms as president of the convention serving more than 5,300 churches. He currently serves on the advisory council of Tarrant County Habitat for Humanity, the Methodist Mansfield Medical Center Advisory Board and the Texas Commission of Law Enforcement Advisory Board (Mansfield).

Born the oldest of six children and a native of Houston, Mayor Evans has been married to Mrs. Lisa C. Evans, his high school sweetheart of more than 34 years. They have two adult children and a beautiful granddaughter.