In 2014 the Mansfield City Council and the Mansfield Park Facilities Development Corporation adopted an On-Street Bicycle Master Plan to make the city a more bike-friendly community and provide residents with avenues linking bikes to Mansfield parks and their extensive trail system. Following public input to the park board and city council discussions, an initial implementation plan was developed that provides for public education, signage and designation of routes and shared lanes throughout the city. 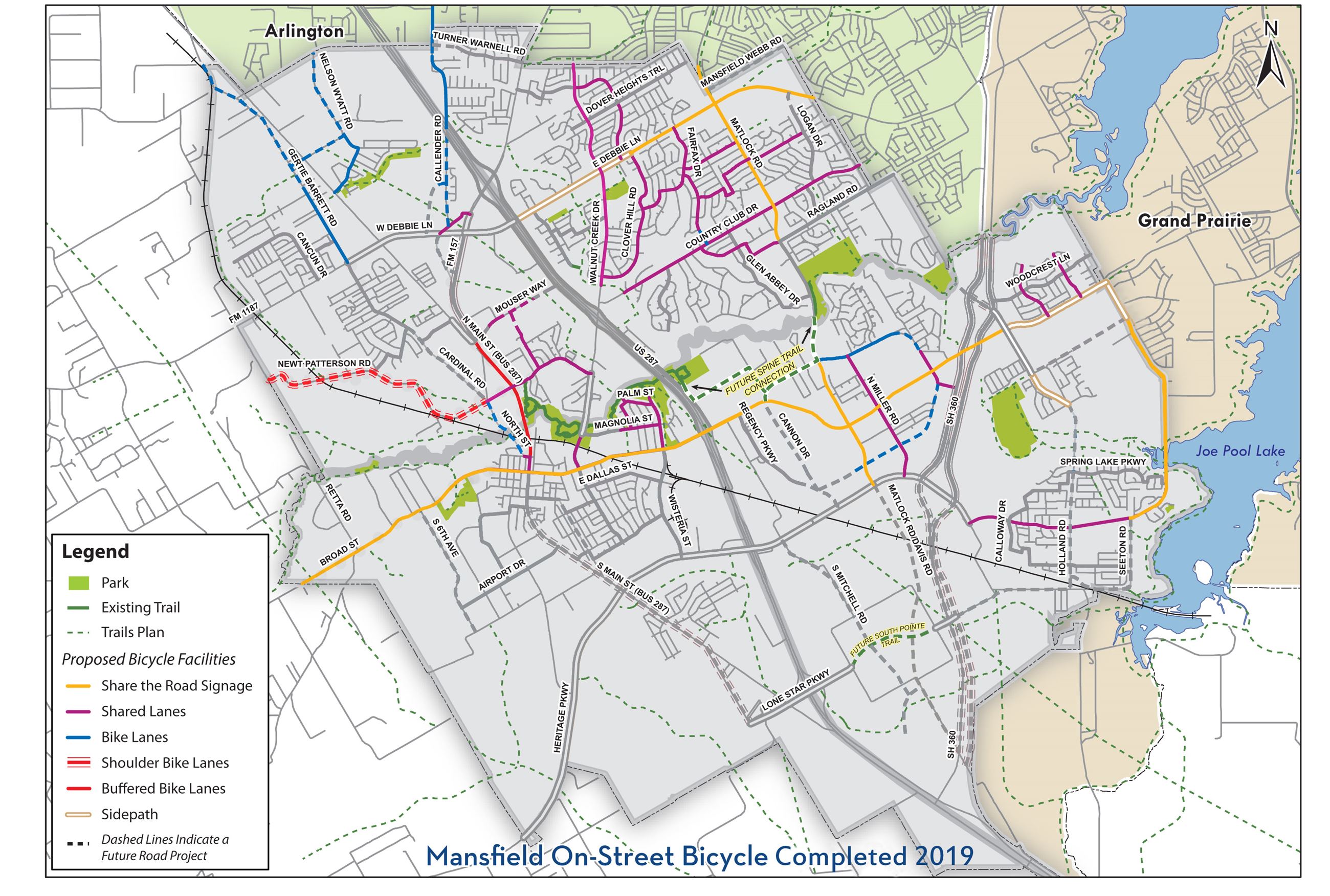 Bicycles may be operated on all roadways, except where prohibited. However certain roads may be more desirable for use due to low traffic speeds and volumes and do not necessitate a separated bike facility. These roadways can be designated as shared lane bike routes with route signage and pavement markings to designate shared use of the travel lanes. Shared lanes should not be used as a substitute for conventional bike lanes when space permits.

To fill a gap or transition between bike facilities

Bike route signage alerts motorists of the increased potential for bicycle activity and informs bicyclists they are on a preferred roadway.

Signage may include wayfinding information to indicate destinations and when to turn onto another street. This helps familiarize riders with the overall bicycle network.

The “Bicycles May Use Full Lane” sign may be used for travel lanes too narrow for bicyclists and motorists to safely navigate side by side.

Shared lane pavement markings (sharrows) may be used in combination with signage and guide bicyclists to the proper positioning within the travel lane.

Rules of the Road

RULES OF THE ROAD FOR CYCLISTS TEXAS BICYCLE LAWS (SECTION 551)

Obey all signs and traffic lights. Cyclists are required by law to follow the same laws as other vehicles.

Never ride against the traffic. Ride with the traffic to avoid potential crashes as drivers cannot see cyclists riding on the wrong side of the road.

Use hand signals. Hand signals can tell motorists what cyclists intend to do.

Ride in a straight line when possible to the right of traffic and a car door width away from parked cars.

Always wear a helmet when you ride a bicycle. Helmets reduce the risk of head injury in a crash.

Use a light to be bright at night. Use a strong head light and tail light at night and during the day whenever visibility is poor.

Motorists should always look for cyclists or pedestrians when driving. Being aware of cyclists and pedestrians is especially important before turning at a green light or making a right on red.

Motorists must allow three feet of space when passing cyclists. Giving a wide berth to cyclists when passing can give both the motorist and the cyclists room to maneuver and stop.

Shared lane markings (sharrows) may only be used on roadways with posted travel speeds ≤ 35 mph.

Shared lane markings may be marked in combination with dashed lines or green color to enhance visibility and encourage riding in the center of the travel lane.

"Share the Road" signage may be used to increase motorist awareness but should not be used to indicate a bike route.